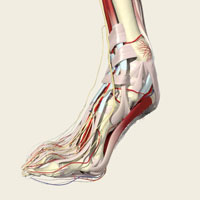 When Eileen Chusid, PhD, looks at Primal Pictures' Anatomy.TV, she sees what may be the future of how general anatomy is taught.

From her vantage point on the Council of Faculties of Colleges of Podiatric Medicine, which includes clinical and pre-clinical deans from all of the nation’s podiatry schools, Chusid helps set teaching objectives for podiatry courses – chairing the histology portion and sitting ex officio on pathology.

“Curriculum is an ever-evolving thing,” she adds. “For right now, what we’re talking about is a hybrid.”

That means a combination of lecture, lab, and digital, such as the 3D Anatomy.TV.

The school invested in the product at the start of the 2017-18 academic year on the recommendation of Joy Reidenberg, who teaches gross anatomy and clinical anatomy at NYCPM and is familiar with Anatomy.TV from her involvement in the American Association of Anatomists.

We are constantly looking for additional information which would help our students, Chusid says. Not everybody learns the same way, so there would be additional ancillary help outside the classroom the student could access himself or herself that would be sort of a programmed learning experience for them.

Chusid used the program in her histology course in fall 2017, and Reidenberg will incorporate it into her anatomy course starting in January 2018.

“I find that when students come into medical school from college, they’re very much on the binge and purge program: study from test to test,” Chusid says.

Chusid found that students had grown overly dependent on the PowerPoint presentations used in lectures, so she tried a different motivational approach to get them to study on their own. She assigned selected modules for students to study in Anatomy.TV.

And she told them she would include, almost word for word, the self-assessment questions from those modules on exams. The information would not be covered in class.

I knew they were studying something besides trying to memorize my PowerPoint.

“Let’s say the student clicks and opens epithelium, and reads through,” she says. “At the end of that module, there are several questions that they click on. If you go over to the left-hand side, it will say self-assessment and there will be three or four questions that they should be able to answer if they’ve read what came before.”

Students have access to Anatomy.TV at any time through the library portal, although the school did notice “an uptick in use before the exam. Everybody expects that.”

Chusid’s motivational ploy worked, as students have done well so far on the Anatomy.TV questions she has included on exams.

“At least I knew they were studying something besides trying to memorize my PowerPoint, that they had to read through the program,” she says.