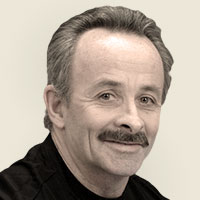 Primal Images Get Under the Skin at Integrated Manual Therapy Seminars

James Waslaski travels about 45 weekends a year – all over the world, by land, air, and sea – to teach Integrated Manual Therapy seminars to massage therapists, chiropractors, osteopaths, physical therapists, athletic trainers, and other professionals.

I have not found any other product out there that helps me educate medical practitioners and patients the way the use of Primal’s images does.

“That’s where I think Primal Pictures’ 3D anatomy is one of the best tools on the market today. It enables you to see the pathology during both the assessment and the treatment phase of manual therapy,” Waslaski adds.

To accomplish this goal, Waslaski – who was inducted into the Massage Therapy Hall of Fame in 2008 and earned the Florida State Massage Therapy Association’s International Achievement Award in 1999 – shows Primal’s images of the underlying anatomy on one screen during his presentations, while another screen shows a close-up of what his hands are doing as he demonstrates a manual therapy technique.

I can take my audience inside the human body to look at the cause of pain, and then teach them specific techniques to eliminate pain.

So many learners are visual and kinesthetic learners. So, I can project Primal Pictures' images onto one screen as we perform specific techniques on a second screen. That allows participants to match each Manual Therapy Technique to the underlying pathology of each clinical condition. Too many educators are just teaching therapeutic techniques, without the students knowing what is happening inside the human body as that specific technique is applied." The interactive function of Primal's 3D anatomy software allows Waslaski to "show antagonist relationships of muscle groups that cause pain when out of balance. It allows me to show functional movements. It allows me to show muscle layers, from superficial to deep. It allows me to show nerve pathways and innervations when I talk about nerve impingements.

From a Hobby to a Passion

Perhaps not surprising for a former serious runner who ran 2:39 at the Boston Marathon in the 1980s, Waslaski took the long road to massage therapy. After starting out in pre-med in college, he entered paramedic training in the mid-1970s and became a fulltime paramedic firefighter in 1980. He worked in a trauma center, emergency rooms, and performed high-level rescues.

“You get to see a little bit of everything,” Waslaski says.

He also taught high-level rescue and paramedic and EMT courses at various junior colleges and hospitals over his two decades as a paramedic.

His initial interest in massage came as a patient. He tore ligaments in his back as a paramedic, and tore his meniscus and had back injuries as a result of his marathoning. “Massage was the one thing that would help me get back into running and training again,” Waslaski says.

After seeing the difference massage therapy made in his own life, Waslaski began studying it in 1990. “I took massage as a hobby, and it turned into a passion,” Waslaski says.

In 1992, while attending the Florida State Massage Therapy Association conference, Waslaski met Benny Vaughn, who would go on to be named one of the most influential massage therapists in the past 100 years by Massage Magazine. Waslaski began training with Vaughn, and discovered not just a new career, but a new calling.

“As I started to blend lots of manual therapy disciplines from osteopathic techniques to massage techniques, we were able to get people out of pain who normally would be in pain all their lives,” he says.

Waslaski began teaching seminars in the early 1990s, and legally incorporated the Center for Pain Management in 1996. In addition to the seminars he teaches, Waslaski also has made a series of DVDs showing others how to use various techniques to relieve pain. In one of his most recent videos, he received permission to include a few Primal Pictures’ images to show nerve pathologies.

“When I first started teaching seminars, I was using the old school, overhead projector,” Waslaski recalls. He would mainly use black and white images that generally showed just a single muscle. Occasionally, he would find an image that showed muscle layering, but rarely if ever one that showed detailed pathology, such as the layering of nerves.

“Looking back, it seems like the dinosaur days,” Waslaski says. “But that was back in the early ’90s. I would show an overhead image, and then go around and work on that muscle.”

“People were just so wowed by the ability to peel muscles off, put them on, look at the nerve patterns, look at movement patterns and antagonistic muscle patterns,” he says.

“I have not found any other product out there that helps me educate medical practitioners and patients the way the use of Primal’s images does,” he says.