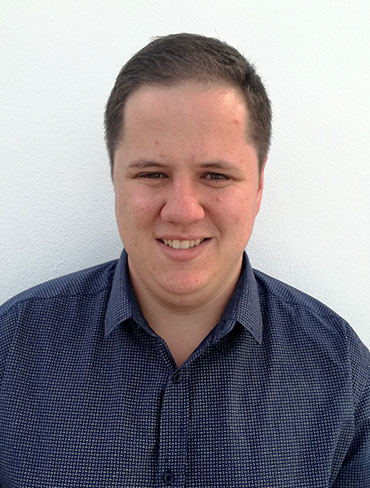 A postgraduate with lecturing and course tutorial preparation responsibilities, Jaudon Foiret of Stellenbosch University in South Africa needed a time-saving tool to suit his needs as both student and teacher. He found it in Primal Pictures.

I have not found any other product out there that helps me educate medical practitioners and patients the way Primal’s images do.

Foiret, in his final year of a six-year master’s program, has lectured on anatomy, histology, basic biology, and more for the past three years. He works closely with students, creating tutorials within the practical components of course modules and acting as a practical instructor as well.

I find [Primal Pictures' tools] such a blessing: really easy to use, really helpful.

As such, he was interested in identifying practical tools that give students and teachers the comprehensive anatomy resources they need – in a time-saving format that is also easy to use.

“Primal in my opinion is almost intuitive in its functioning and allows for easy use. And when a student is stressed out about an exam, the ease of use and easy, bite-size information is especially important,” Foiret says. He notes that in other anatomy resources, relevant information is often buried within a video, forcing students to watch the entire thing to get to the tidbit they need.

Likewise, the level of detail on other resources is not as deep as that which he found in Primal. “The graphics on Primal I find are very clean and very easy to understand, and not as convoluted,” he explains. “One of the functions I do like about Primal as well is that you can actually get all the information very easily off of Primal. And that’s one of my biggest things for students as well, not only for myself.”

As a student, he reports regularly seeing classmates using Primal Pictures to prep for practicals or study for exams in the university library; although, its usage is not mandated by the school.

As an instructor, Foiret also relies on the accuracy of Primal Pictures’ tools to augment the time his students get in the lab working with cadaver specimens. “As anatomists, in general, one of the biggest things we struggle with is 3D conceptualization of an actual area,” he explains. “As much as we do with specimen cadavers in Stellenbosch University, it’s not always as easy to understand things from that perspective because you’re working from different modalities. So, you’re working from a cadaveric specimen to a textbook. And it’s very difficult, even when regarding anatomical variation, to actually marry the information between what you’re working with on a wet specimen versus what you’re seeing in a textbook. Of course, even worse is often you’re actually just working with a textbook, which has no 3D depth, or you have no conceptualization of what’s around in the area.” To support his need, he uses Primal Pictures’ 3D Atlas and 3D Real-time tools to fill in the gaps sometimes left by using wet specimens alone.

“Specifically, in the 3D Atlas, the layering function I find amazing: you can actually understand the depth of structures,” says Foiret. “And then, my personal favorite thing about Primal Pictures is the 3D Real-time atlas. And I find that once you want to start testing your anatomy knowledge and real understanding in an area, you can go into that context [using 3D Real-time] and actually start [defining] what you know to be the human body. It’s an absolutely amazing function, and very nice to build an understanding of the connections between systems and between structures, which in anatomy, and especially when you’re looking into clinical anatomy, becomes highly important for the interplay between structures… and how that’s going to affect physiology at the end of the day.”

Students don’t generally use something unless it’s a prerequisite for their module or they find great value in it. So, I think it speaks volumes for Primal that as part of a non-prerequisite… they’ve actually gone and used it… It’s something that the students really enjoy.”