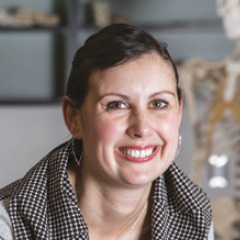 School of Kinesiology and Health Science

Nicolette Richardson, PhD is an Assistant Professor at the School of Kinesiology and Health Science at York University in Toronto, Canada, where she teaches Anatomy and Physiology. Dr. Richardson was first introduced to Primal Pictures when she arrived at York seven years ago. At that time, the school licensed an older version of Primal software.

York is a really large institution. In a typical year we’d have about 900 students in our core Anatomy course in the fall, and another 400 students in the spring. These students take up the majority of the time in our two anatomy lab spaces. One of our advanced human anatomy courses focused on the anatomy of the head, neck and trunk, but the class had no lab time at all. Learning anatomy with no experiential component – no active learning – was an issue.

“I started looking for dissection software to integrate into the course to give students that important experiential component. The older version of the Primal products on Anatomy.tv didn’t have enough detail, so I had to use a couple of other resources as well. But when the new Primal Pictures HTML5 came out, I switched immediately because the detail is so much better, and Primal has many more options than others I looked at. For example, you can spin the specimen, highlight, and label, so you get a better sense of the relationships of the structures. I was surprised that the other software didn’t allow a lot of movement of the specimen you were ‘dissecting’. Primal is simply a better product.”

“I used Primal software initially as a virtual lab for students. That was my initial goal with Primal, and I definitely think that we’ve accomplished that. Every week they have a list of structures they have to find, examine from different angles and get to understand the relationships between the structures. Next, we discuss, and later I give them online quizzes using images from the Primal software.”

“They’re required to go into the Primal software and find different structures; not just identify them, but be able to talk about attachments, and actions, and nerve innervations and things like that. So, it’s quite a bit of detail that they have to get, which I expect is why they’re spending so much time in there. After two or three labs, the material is grouped together in an online quiz. I take pictures from the software and students answer questions about them. I use Primal in some of my lectures as well, depending what we’re doing that day.”

Student engagement has been excellent... My students tell me that they’re now using Primal to supplement some of their other courses as well and they’re enjoying it.

The Kinesiology students at York take a core human anatomy course in their second year that teaches them systems anatomy and includes an extensive physical lab component. “This course also is huge and takes up a lot of the lab space and time. So, our advanced kinesiology courses of only about 80 students don’t always get lab access.

“Kinesiology students are going on to become physiotherapists, nurses, doctors, dentists, physical therapists, athletic therapists – so a really thorough understanding of anatomy is incredibly important for them. Having Primal as an integrated component of the advanced course has really helped them gain a better understanding of structural relationships, as well as the functions of the structures, because of how they relate to one another. That’s going to help them a lot going into the types of careers that kinesiology students go into.”

Primal Gets an A+ for Student Engagement

“Student engagement has been excellent. I know from chatting with some of my students. I definitely think they use Primal more than once a week to go through each lab several times. I also think what drives the usage we see is that students are getting tested on it! My students tell me that they’re now using Primal to supplement some of their other courses as well and they’re enjoying it.”

“Some students have told me they’ve used Primal on their phone, although the majority are using it on a laptop or a tablet, and some have desktops as well. I use all three, my laptop, tablet and my desktop to access Primal software! I’ve had students using Primal software on all manner of devices with no problems, so I think they’re having a very positive experience with it. I’ve definitely had problems with some of the other software I’ve tried but using Primal has been quite smooth.”

Before the University agreed to invest in the updated Primal Pictures site license, Dr. Richardson’s students were all paying about $50 a semester for personal access to whatever software the college was using. “I just don’t like having to put that on them. With the Primal site license, we’re now in a happy place.”

Recommends Primal to Other Universities

“I’ve told colleagues that teach at other undergraduate institutions about my experiences with Primal. With many of their courses they find themselves in a similar situation where, unless you’re teaching the medical students, your students don’t get quite as much lab access. I’ve recommended Primal as a supplement to their lab time, especially if that time is minimal.”

Dr. Richardson will go on sabbatical soon, but she has big plans for when she gets back. “We’re planning on integrating Primal Pictures into the really big class of 900 students. So, if you think the usage stats are high now, just wait!”