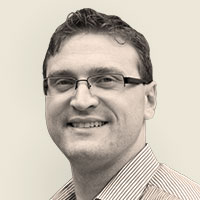 When Philip A G Dewhurst, Doctor of Chiropractic, was a student at AECC University College in 2001, a lecturer introduced his cohort to Primal Pictures’ Interactive Spine: Chiropractic Edition CD-ROM, and it quite literally changed the way he viewed anatomy.

The pictures are 3D, real-time, and you can literally see the big picture and then go into the details.

For a student at the time, it was revolutionary," Dewhurst recalls. "Suddenly, you had something that was three dimensional and you could flip the image around and still get the information you would get in a textbook. It was a real game-changer in order to understand where things are in the body.

Today, Dewhurst is a lecturer in chiropractic sciences at the college, specializing in teaching anatomy, and he is using the latest evolution of Primal’s game-changing anatomy series – the 3D Atlas of Human Anatomy and 3D Real-time Human Anatomy, delivered online through subscription via Anatomy.TV – to change the way his students view the subject.

Dewhurst worked in private chiropractic practice for three years before accepting a full-time lecturer’s position in 2008 at AECC University College, located in Bournemouth on the south coast of England. He says when students have difficulty understanding or conceptualizing human anatomy, “the majority of them are just trying to memorize information and they’re not really applying it. And they’re not seeing the big picture, as it were.”

That’s where Primal Pictures comes in. “The pictures are 3D, real-time, and you can literally see the big picture and then go into the details,” Dewhurst says.

The Anatomy.TV products are featured in some of the students' pre-reading assignments for classes, as well as in the recommended resources for the unit. Dewhurst also incorporates pictures taken from Anatomy.TV in lectures, as well as some of the videos, and includes hyperlinks so that students can go to the pages he is demonstrating.

One of the courses Dewhurst teaches is neuro-anatomy, and one of the biggest struggles students have with the topic, he says, “is trying to visualize it in three dimensions.” Understanding how muscles function is less challenging because the students can observe muscles on themselves and on cadavers.

“But they really struggle to understand and put together the brain and the spinal cord in three dimensions and understand that there are pathways that run through it,” Dewhurst says.

When he started teaching the course, he says, he recommended that students use the 3D Atlas of Human Anatomy (the subscription allows students to use it any time by logging in to the college’s library services) when they study to help them “build up a three-dimensional image of how the nervous system works.”

For the muscular-skeletal anatomy courses he teaches, Dewhurst strongly recommends that students use it when they study as an interactive alternative to relying solely on a textbook. “You can actually click on something, rotate the image, zoom in and zoom out, and get the textbook information at the same time,” he says.

In addition to using Primal Pictures anatomy products as a student and a teacher, Dewhurst also was involved in the 2011 update of the Anatomy for Chiropractic program along with two colleagues from the college.

“We reviewed the product (now part of the 3D Atlas), and identified where the gaps were, where evidence was out of date, where there was new thinking going on, and put together a revised template for how to update the program,” Dewhurst says.

The process took about 18 months, during which he had the opportunity to visit Primal Pictures offices in London and see first-hand how many people and how much expertise and work goes into developing the anatomy series. “Knowing what goes into that, I have 100 percent more confidence in that than anything else I have seen on the market,” he says.

And Dewhurst fully expects that Primal Pictures anatomy products will play an important role in the institution’s future as it prepares to make the transition from an independent college to a publicly funded university next year. As a university, the institution plans to increase the number of health-related courses it offers, which will increase the demands on the anatomy lab.

One proposal under consideration involves setting up cameras with televisions in the lab and having iPads available there for students so that instead of having them gather around the tutor, the tutor can demonstrate on one table and the students can watch it on TV. If the tutor is rotating an arm, for example, the students would simultaneously be able to perform the same rotation on their iPads on 3D Real-time Human Anatomy, which Dewhurst says would be “almost like the real thing in their hands.” The product also allows users to take an image and add their own labels and annotations.

Dewhurst says that would turn the Primal Pictures product into “a tool they’re actually using alongside their teacher and the cadavers so they can really get an appreciation of what it is. It’s more active than having a textbook next to them. And they can change the view on Anatomy.TV to reflect what they’re doing in the lab. That, for me, is where I would like to see it evolve to.”