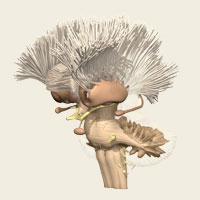 Bringing anatomy to life in a remote, rural college setting.

Layer by layer, the image of the human brain unfolds in vivid, colorful 3-D on the computer screen, revealing what looks like a vintage Mohawk hairdo from the punk era.

You want to talk about a visual understanding of what you’re trying to teach, this personifies Primal Pictures’ software in a heartbeat.

“I’m a neuro-geek, so I love this one,” exclaims Dr Shaun P McGuire, a licensed chiropractic practitioner and biology instructor at Cochise College in southern Arizona. The “Mohawk,” he explains, is actually the corpus collosum, which is Latin for “tough body” – the swath of myelinated fibers that connects the two hemispheres of the brain.

The detail is astounding. "You want to talk about a visual understanding of what you're trying to teach, this personifies Primal Pictures' software in a heartbeat," Dr McGuire says.

He then switches to a different image that ostensibly shows the same portion of the brain, a traditional, 2-dimensional textbook illustration from another online site.

It appears flat, offering “a poor understanding of what you’re looking at,” he says.

“The tools that Primal Pictures created for me to do what I do are much better,” Dr McGuire says.

He has been a fan of Primal Pictures since his graduate school days, almost 20 years ago, when he took an elective course to learn a soft tissue technique known as the Active Release Technique. The instructor used Primal images to show how the technique worked, and it made a lasting impression on Dr McGuire.

At the time, I'd never seen anything like it," he says. "They were just mind-blowing.

After graduation, Dr McGuire went into private practice as a chiropractor for a decade. Seven years ago, he started teaching biology part-time at night at Cochise College, a two-year public community college. When a fulltime faculty position opened in 2012 at the college’s center in Benson, he applied and was hired. Cochise has two campuses, in Douglas and Sierra Vista, and centers in Benson, Nogales and Willcox.

When he started teaching, he struggled with how to convey the abstract complexities of anatomy to students without a cadaver in the lab and without quality images.

He found the answer when he saw the Primal Pictures booth at the Human Anatomy and Physiology Society annual conference in Las Vegas in the summer of 2013, which attracts some 2,500 educators from around the globe and dozens of exhibitors.

As he checked out how Primal Pictures’ 3-D anatomy offerings had evolved since his graduate school days, Dr McGuire says, “I saw exactly how that would work in my classroom.

I can deliver your textbook on any smartphone, tablet, or device anywhere in the world," he says. "That's cool as hell. And the images are untouchable. For me, the Primal Pictures software was exactly what I was looking for. Exactly.

Asked what sets Primal Pictures apart, Dr McGuire replies: “The quality of their images, hands down. It’s images, images, images, and – one more time – images. And with that, video.”

When he was in college and grad school, Dr McGuire says, textbooks were the main tool for students to learn. Today’s students have far different expectations. That’s why the compelling videos and interactive imaging incorporated into Anatomy.TV are critical to helping students understand the subject matter – especially those taking courses online.

“I’m a rural, community college professor, and I’m away from the biggest campuses,” Dr McGuire says. “We’ve got 12,000 students, and 10,000 are at one location. I’m not there. I reach into two centers even more remote. The Primal Pictures program helps me do what I do better.”

October Webinar Alert: An Anatomy.tv 'How To' Tour

How much anatomical accuracy are you willing to live without?

Breastfeeding: The anatomy and physiology behind milk production

Benefits, troubleshooting & what to expect

A partnership with the University of Liverpool